For the hundreds of thousands of fans who have sang, danced and celebrated with the band, Great Big Sea has been a constant factor in their own lives. While musical fashions have come and gone, Great Big Sea has maintained an unswerving commitment to their original ideals – a belief that a marriage of their own creativity and the joyous folk music of their home in Newfoundland would be an unbeatable combination. Alan Doyle, Sean McCann and Bob Hallett have somehow managed to keep the dysfunctional-family-bar-room-brawl-student-art-project-musical-pirate-crew known as Great Big Sea going for two decades. And more often than not, they have done it with more than a bit of flair. 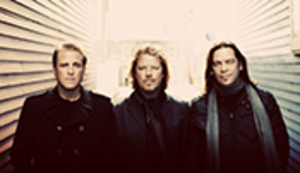