The last of fourteen children, born in Arkansas and raised in Southern California, DeMent spent her childhood immersed in gospel and traditional country music. Infamous Angel, initially issued on Rounder in 1992, before being picked up by Warner Bros., immediately established her as a promising and talented artist. Its 1994 follow-up, My Life, earned a Grammy nomination in the Contemporary Folk category and her 1996 album, The Way I Should, which addressed political, as well as personal themes, brought her a second nomination. Along the way, several of DeMent’s songs became cultural touchstones. ‘Let The Mystery Be’ found its way to MTV Unplugged as a duet by David Byrne and Natalie Merchant. ‘Our Town’ was played over the farewell scene in the series finale of Northern Exposure. Merle Haggard, invited her to tour with his legendary band ‘The Strangers,’ sitting in as piano player and later went on to record two of her songs, ‘No Time To Cry’ and the gospel tinged ‘The Shores of Jordan.’ She’s recorded and toured extensively with John Prine, singing four duets with him on ‘In Spite of Ourselves,’ and had a minor role in the motion picture ‘Songcatcher,’ as well as contributing a song to its soundtrack. In 2004 she recorded the gospel album, Lifeline. ‘I took a bunch of old church songs I love…songs I’ve sung since as far back as I can remember, and sat down at a worn out, warbly piano with some tape rolling.’ One of the songs caught on that tape, was her rendition of ‘Leaning on the Everlasting Arms,’ the song the Coen Brothers, in 2010, chose to run over the closing credits of their remake of the classic western ‘True Grit.’ And now, 23 years after her debut album ‘Infamous Angel,’ DeMent is busy preparing for the August release of her latest work ‘The Trackless Woods,’ a collection of 18 poems written by the late Russian poet Anna Akhmatova and set to music by DeMent. More on that to come! DeMent continues to tour extensively, singing the songs she loves: ‘My mom, who sang all the time, straight up to the end, said to me one day, not long before she died: ‘singin’ is prayin.’ Even though I’m not religious in the way I was brought up to be, I understand what she meant. That’s what it feels like for me, too. We’re always linked to things bigger than ourselves but when I’m singing is when I most know that. It’s a good place to go…as often as possible!’ 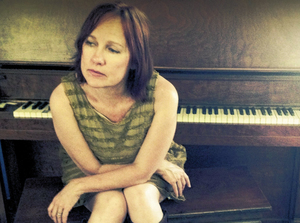