Lake Street Dive have been performing for nearly a decade after meeting as fellow students at the New England Conservatory in Boston. The band was hand picked by Minneapolis trumpet/guitar player Mike Olson and named after an actual neighborhood of seedy bars in his hometown. Vocalist Rachael Price came from outside Nashville, Tennessee, stand-up bassist Bridget Kearney was an Iowa native, while drummer Mike Calabrese called Philadelphia home. ‘I wasn’t only impressed with their musicianship,’ says Olson, who acquired the nickname ‘McDuck’ while at the conservatory for his reclusive ways. ‘They were also a lot of fun just to hang out with. The first four years of rehearsals were more like glorified dinner parties.’ The new album, Bad Self Portraits, which is being released by the Northampton, Massachusetts indie label Signature Sounds Recording as the follow-up to a self- titled debut and subsequent EP, is a microcosm of Lake Street Dive’s evolution of the band from ‘a weird alt-country jazz group to a pop-soul juggernaut, that turns ’60s influences like Brill Building girl groups (‘Stop Your Crying’), British Invasion rock (‘Bobby Tanqueray’), horn-driven Stax R&B (‘You Go Down Smooth’), Motown soul (‘Use Me Up’) and even The Band-like gospel blues (‘What About Me’). ‘Our musical development has been like Google Earth,’ explains Olson, ‘going from the entire universe to a specific place. That’s how we’ve honed in on our sound. We had the whole world of music at our fingertips, and we were unsure of what direction to take, but now we’re zeroing in a little closer.’ And as things are rapidly growing for Lake Street Dive, the nine years that they spent focusing on their musical development has left them with one constant to strive for. ‘We are named in homage to dive bar bands,’ says Calabrese, ‘we were, are and always will be a dive bar band. Whether we’re playing for 10 people or 10,000 we want them to have that feeling.’ 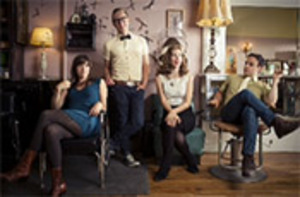