SOLD OUT Radiators ‘The Last Roundup: The Radiators Farewell Tour’

The Radiators were formed in New Orleans in 1978, the result of a casual afternoon jam session in keyboardist Ed Volker???¨?«s garage. Volker, drummer Fran Bua, Jr.and guitarist Camile Baudoin were then members of the Rhapsodizers. Guitarist Dave Malone and bassist Reggie Scanlan were in another band, Roadapple, and the magic the 5 musicians conjured up that afternoon was just what they???¨?«d all been searching for. Later that same week they learned several original songs that they still play today. They soon became an integral part of the re-vitalization of the New Orleans music scene that saw the growth of the New Orleans Jazz & Heritage Festival and the birth of the city???¨?«s premier music club, Tipitina???¨?«s. The band played with many legends of New Orleans music: Professor Longhair, Jessie Hill and Ernie K-Doe, as well as being Earl King???¨?«s regular back-up band for many years. A favorite party band for college students throughout the eighties, The Radiators toured extensively all over the U.S., often playing 4 night stands at New York???¨?«s musical mecca, The Lone Star Caf???¨?«. Signed by Epic Records in 1987, they released 3 studio albums, which received widespread radio play and featured such Rads???¨?« classics as ???¨?«Like Dreamers Do???¨?«, ???¨?«Doctor Doctor???¨?«, ???¨?«Confidential???¨?« and ???¨?«Suck The Head???¨?«. Currently the band operates their own label, Radz Records, which has re- released 5 classic Rads???¨?« CDs, Heat Generation, Work Done On Premises, Bucket Of Fish, New Dark Ages and The Radiators. In addition in July 2008 the label released the critically acclaimed 30th Anniversary 2 -CD compilation Wild & Free and in May 2009 the band released The Lost Southlake Sessions, recorded in the early 90???¨?«s and thought to have been lost to the floods and humidity of New Orleans. Time has seasoned The Radiators, but far from slowing down they still keep up a brisk and comprehensive touring schedule playing close to 150 dates a year all over the country. Warren Haynes, Derek Trucks, Bob Weir, Maceo Parker, David Bromberg and George Porter Jr. are just some of the luminaries who have sat in with the band through the years. In addition The Radiators have held down one of the coveted closing spots at the New Orleans Jazz & Heritage Festival for 20+ years and???¨?«.yes, you can still find onstage at Tips and all of the legendary New Orleans???¨?« clubs. 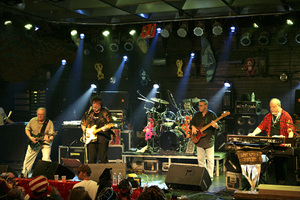