Named by Rolling Stone Magazine as one of 2003’s Top 20 Guitarists of all-time and the recent recipient of both an Ivor Novello Award for Songwriting and the 2006 BBC Lifetime Achievement Award, the iconic British folk rock legend is one of the world’s most critically acclaimed and prolific songwriters. His work is admired and recorded by such artists as Bonnie Raitt, David Byrne and Elvis Costello. From his teenage years as a founding member of the 1960’s pioneering group Fairport Convention to duo work with his then-wife, Linda Thompson, and over 20 years as a solo artist, to scoring Werner Herzog’s 2005 documentary ‘Grizzly Man’, Richard Thompson’s astounding body of work includes over 40 albums of lyrical wit anchored by such a singular acoustic and electric guitar delivery that Newsweek recently announced, ‘like all genuine art, it satisfies completely.’ 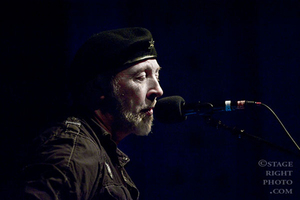