Robben Ford is one of the premier electric guitarists today, particularly known for his blues playing, as well as his ability to be comfortable in a variety of musical contexts. A five-time Grammy nominee, he has played with artists as diverse as Joni Mitchell, Jimmy Witherspoon, Miles Davis, George Harrison, Phil Lesh, Bonnie Raitt, Michael McDonald, Bob Dylan, John Mayall, Greg Allman, John Scofield, Susan Tedeschi, Keb Mo, Larry Carlton, Mavis Staples, Brad Paisley, and many others. Born in 1951 in Woodlake, California, and raised in Ukiah, Robben was the third of four sons in a musical family. Robben’s first chosen instrument was the saxophone, which he began to play at age ten and continued to play into his early twenties. He began to teach himself guitar at age thirteen upon hearing the two guitarists from The Paul Butterfield Blues Band, Michael Bloomfield and Elvin Bishop. In the late 1960’s, Ford frequented the Fillmore and Winterland auditoriums in San Francisco to see Jimi Hendrix, Eric Clapton, Cream, Led Zeppelin, Albert King, B.B. King and all of the progenitors of blues. ‘It was an incredible time for electric guitar,’ Robben recalls. Provogue Records/Mascot Label Group released Bringing It Back Home in February, 2013, to critical acclaim both in the U.S., Europe and Japan. This album revisits and reshapes Ford’s musical roots, with studio accompaniment from Harvey Mason, Larry Goldings, David Piltch and Stephen Baxter. In March, 2014, Provogue will issue A Day In Nashville, a tour de force of live studio recording, accomplished literally, in just one day in Nashville. An important and essential component of Robben’s career is his commitment to teaching and passing on what he’s learned over the past 40 years to current and future musicians. His instructional videos and clinics over this time have culminated in a collaboration with TrueFire and the birth of the Robben Ford Guitar Dojo. The wealth of his expertise and creativity is generously presented in these state-of-the-art productions, and will be, for years to come. 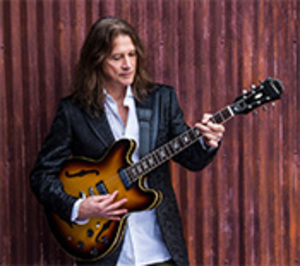