Time hangs heavy on the vine/Let’s make wine,’ Ryan Montbleau sings in the lulling, sensual verse that gives his group’s new album its title. Ryan Montbleau Band has been tending its own musical vineyard for a few years, on the patient cusp of a breakthrough. Their distinctive, long-fermenting blend of neo-folk, classic soul, and kick-out-the-jams Americana finally comes to full fruition in Heavy on the Vine. It’s an album that represents the product of ‘ and further promise of ‘ a very good year. Don’t worry if the classic sounds they’ve bottled up remain a little hard to put a label on. ‘I’m not one of these people who say ‘Oh, we can’t be pigeonholed.’ I honestly wish we could, just so I could describe it quickly to people,’ says Montbleau. ‘This record has folk songs, funk songs, country tunes, a reggae tune . . . and the end is almost like prog-rock. It’s all over the map, but it’s all us, and we do it all wholeheartedly. We’ve sort of come up in the jam scene, and that’s where our hearts have been in a lot of ways, but we don’t go off on 15-minute epics. We’re actually trying to make the songs shorter as we go. So I would lean much more toward the Americana thing than the jam thing. But, more than anything, we’re definitely about the song.’ 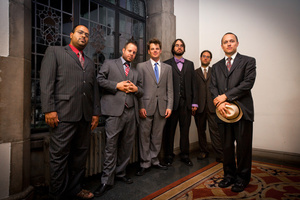