Imagine blending the sounds of Mardi Gras funk, soft rock, and reggae so seemingly it defies category. Now shrink that idea into a seven-piece ensemble, add a hip hop sensibility plus a hundred years of New Orleans jazz tradition, and you get the Louisiana sound known as the Soul Rebels. This shrewd crew of college trained multi-instrumentalists are forcing listeners to ‘Let Your Mind Be Free’ as they ‘Work It Out’ on the dance floor. Their music is utterly uplifting and hardcore, leaving fans with a myriad of intrinsic sounds and songs to enjoy. The Soul Rebels were destined for success. After parading around the streets of New Orleans in the tradition of the second line and jazz funerals, the Soul Rebels began their professional debut with the famed Neville Brothers in New Orleans at the hot spot Tipitina’s! The Soul Rebels rocked so hard and so strong, they continued opening for the Neville Brothers and beyond. The bands hard funk groove has landed them gigs as an opening act for: Bootsy Collins, A Tribe Called Quest, Better than Ezra, Counting Crows, Green Day, Olympia Brass Band, Dirty Dozen Brass Band, Roy Hargrove, James Brown, Allen Toussaint, Lionel Hampton, Terence Blanchard, Branford Marsalis, The Fugees, Digital Underground, The Roots, Brand New Heavies, The Gap Band, Robert Plant & Jimmy Page and many more. Soul Rebels is headlining the 2011 Hoop City Jazz Festival on July 8 in Springfield, MA. They also just played the 2011 New Orleans Jazz and Heritage Festival and totally killed it. And they are playing the 2011 Montreal Jazz Festival for the second year in a row. They were huge hit the festival invited them back. 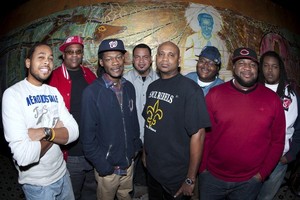