Joey Spampinato, a founding member of NRBQ, the legendary rock n’roll band for several decades where he served as bassist, vocalist, and songwriter. He played on several international artist’s releases including Keith Richards’ album ‘Talk Is Cheap,’ Bonnie Raitt’s ‘Fundamental,’ and was one of the bassists on Eric Clapton’s ’24 Nights: Live From Albert Hall’ in 1991. He appeared in the film ‘Hail, Hail Rock N’ Roll’, with the legendary Chuck Berry, Keith Richards and many more. Johnny Spampinato, the personable left-handed guitar slinger, continues to provide vocal & writing talents to the group as well as casting his contagious enthusiasm equally for his fishing excursions. He joined NRBQ in 1994 and is now a major contributor to the Spampinato Brothers. Johnny was part of the NRBQ lineup when they appeared on ‘The Simpsons’ as animated characters, and was the first band to perform as themselves, LIVE on the show. Today, Joey and Johnny, as The Spampinato Brothers, are writing, recording and touring prominent venues around the nation. 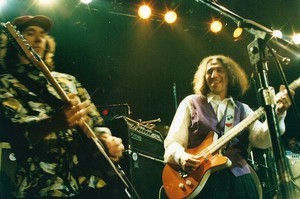