Stephane Wrembel and His Band

One could call Stephane Wrembel a nomad, a gypsy, a world Traveler, for the music he plays and his lifestyle are expressions of the gypsy way of life. Born in Paris and raised in Fontainebleau, home of impressionism and Django Reinhardt’s music. Wrembel was classically trained in a music conservatory starting at age four. Stephane’s life took a decisive turn in his late teens when he first discovered the music of Django Reinhardt and the Gypsies. He spent the next ten years of his life learning, playing, and expanding on this musical tradition. This hard work gave Wrembel the technique, but the time spent playing around the campfires and trailers of the Gypsies gave him the soul – both necessary ingredients for him to master his art form. Stephane’s education continued at the Berklee School of Music where after studying contemporary jazz and world music he graduated summa cum-laude. Soon after he moved to New York City to live and continue his career. Like New York, Stephane is always in motion, always searching and never stopping in his quest for a new sound… ‘A REVELATION’ -David Fricke, Rolling Stone Magazine ‘One the greatest guitar players I’ve ever seen …and I don’t say that lightly.’ -Josh Baron, Relix Magazine 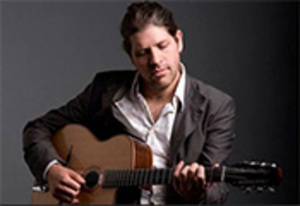