First time Gospel Brunch same great food as our Blues Brunch. We will feature a scrumptious brunch provided by the excellent Pranzi Catering with a heavy dose of gospel music that will have you on your feet. A great way to spend a Sunday morning/afternoon. The event will be limited to 140 people with table seating for everyone. Tickets must be purchased in advance and sales will stop on Friday March 20 at 3 pm. The brunch will be an all you can eat buffet with Fresh Fruit Salad, Scrambled Eggs, Pancakes with warm maple syrup, Baked Virginia Ham, Breakfast Sausage, Chicken Francaise, Sweet Potatoes and Red Bliss Potatoes Home Fries, Assorted Breakfast Pastries and Bagels, Juice, Coffee and Tea. We will have a cash bar with Mimosa’s, Bloody Mary’s and Beer and Wine. In the six years since the release of their last full-length record, Naomi Shelton & the Gospel Queens have toured extensively, playing main stages at some of the most prestigious festivals in the world, including Bonnaroo, The Monterey Jazz Festival, Montreal Pop, and The Ottawa Blues Festival. Though seasoned veterans, these last years of touring played a crucial role in the creation of the songs that would become the forthcoming album Cold World. With Gabriel Roth (Bosco Mann) at the helm, Naomi and company went into the studio (add date), and cut twelve inspired new songs live to eight-track tape. Though the music is most unapologetically gospel, most of the lyrics on the record would fall under what could be called ‘message songs.’ That is, music containing uplifting spiritual messages, reminiscent of the more inspirational moments of The Staple Singers or Curtis Mayfield. However, the relationship between gospel and soul music does not need to be discussed again here. It is as plainly and naturally inherent in these grooves as it is in the singer’s every word and motion. There is no one alive today that has a voice or spirit more capable of lifting an audience than Naomi Shelton. On this record, the grooves are pure Soul. ‘Sinner’ sits atop Side One as a dark welcome into the soulful stomping world of the Queens. They flow effortlessly from the Sunday stomp of ‘Get Up, Child’ to the country-twinged swagger of ‘One Day’ and ‘I Earned Mine’; from the river’s edge lilt of ‘Everybody Knows’ and ‘I Don’t Know’ to the energetic boogie of ‘Thank You Lord’, ‘It’s A Cold, Cold World’, and ‘Bound for the Promised Land’. At the heart and soul of the band’s sound lie Naomi’s raw, gritty vocals, commanding attention with every heart-wrenching syllable. Veteran Queens Edna Johnson and Bobbie Jean Gant ‘ who have been singing with Naomi for the better part of 20 years ‘ joined rookie Queen Angel McKenzie ‘ who joined the group in the winter of 2013 ‘ to provide perfect answers to Naomi’s calls. The band, whose ages range from 17 to 82, is led by Brother Cliff Driver with a musical pedigree that includes working with legends Baby Washington, Little Willie John, King Curtis, Sam Cooke, Jackie Wilson, and Solomon Burke. On bass guitar is the infamous Fred Thomas, who spent the better part of his musical career backing up The Godfather of Soul himself, Mr. James Brown ‘ in the eponymous JB’s. Rounding out the group are Jimmy Hill, who played alongside Wilson Pickett in the late 60’s, guitar whiz Max Shrager, who at the tender age of 17 composed two of the album’s tracks, and Mikey Post on drums, who spends his 9-to-5’s helping run the business at Daptone HQ. Doors 10:30 Show 11:00 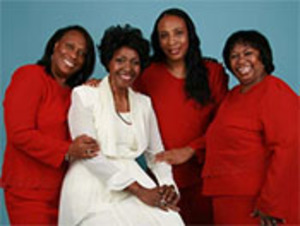