Sunny and Her Joy Boys is the brainchild of Stony Plain’s award-winning guitarist and producer Duke Robillard, and it marks the remarkable voice of Sunny Crownover, whose beautiful interpretations of tunes from the great American songbook are nothing less than a revelation. The latest of many eclectic and wildly different projects Robillard has brought to Stony Plain, it’s also the first that’s featured a woman singer, and a band of classic jazz players ? and one without a drummer. Now based in New England, Crownover spent a large part of her life in Texas. Robillard heard her sing for the first time in late 2007 at a Harvard University concert and knew he’d found the voice he was looking for to bring a project to life he’d been wanting to do for over 35 years. The CD salutes the golden era of women vocalists of the ’20s through the ’50s, where big bands and small combos alike created classic American pop, swing and blues songs of the day. Robillard says he’s wanted to cover this sort of classic jazz for 35 years. ‘I’m really fond of the swing-era female vocalists, and tunes from the Depression Era, Tin Pan Alley tunes and tunes by the great writers. Until now, I never found the right vocalist.’ Robillard assembled a small all-acoustic group to provide sympathetic backing to Crownover’s voice, with Billy Novick on clarinet and alto saxophone, Duke and Paul Kalesnikow on arch top guitars and Jesse Williams on acoustic bass. 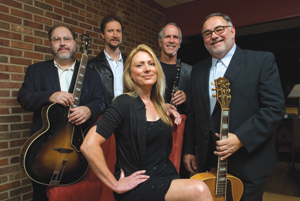