Dubbed by NPR as the “Empress of the Unexpected,” singer/songwriter Susan Werner confirms her reputation as an artist changeable as the weather with her newest recording Hayseed. Paying tribute to American agriculture and to her Iowa farm roots, Werner again keeps her audiences guessing and laughing simultaneously, lending her wry humor and passionate voice to subjects such as farmer’s markets, agrochemicals, climate change, drought, longing for a sense of place, and the movement towards sustainable agriculture.

The characters and perspectives are varied and colorful, the lyrics are sharp as thistles, the music is handmade and hoppin’, and with Hayseed,Werner continues her reign as one of the most bold and creative forces on the acoustic music scene today.

Listeners will recognize Werner’s Americana roots, first heard on 2011’s country/blues tinged Kicking the Beehive; however, the collection of originals that appear on Hayseed hits even closer to home. “Everything was mandolin and banjo and upright bass and fiddle,” she says. “A sound that’s as – forgive the term, but it finally applies – organic as a sound can get.” Released on Sleeve Dog Records and distributed via Thirty Tigers, the album itself was commissioned by the University of Nebraska’s Lied Center For The Performing Arts and the Institute for Agriculture and Natural Resources, and the entire project began with seed money from fans during a successful PledgeMusic campaign. Werner incentivized fans with unusual rewards like signed ears of corn from her folks’ farm, and a percentage of the money raised was donated to three farming charities; Practical Farmers of Iowa in Ames, Midwest Organic and Sustainable Education Service (MOSES) of Spring Valley, Wisconsin, and The Land Institute in Salina, Kansas. Known for her engaging and energetic live show, Werner will be adding another homegrown aspect to her Hayseed tour schedule—making special appearances at local farmers markets throughout the nation.

Hayseed was produced by Boston-based songwriter and producer Crit Harmon (Martin Sexton, Lori McKenna, Mary Gauthier, Ed Romanoff). “I chose Crit to produce because he’s a songwriter himself, and that was hugely important to me,” Werner says. “And also because he grew up on a farm in the Midwest and knows the business end of a honey wagon. I knew he’d get the spirit of the songs, the sense of humor and the sense of place in these songs. I also knew he’d assemble a great cast of musicians, and this is the A list of the A list of the Boston area players.” That cast includes legendary guitarist Duke Levine, upright bassist Marty Ballou, dobro genius Steve Sadler, and Red Molly’s Laurie MacAllister on backing vocals. “Crit totally got it when I said this should sound like it’s being played on the front porch of a farmhouse,” Werner continues. “I wanted this thing just about as unplugged as anybody could stand it. I mean, Dubuque was the big city where I grew up, and that’s about as urban as the sound on this album could get and still be true to Delaware County, Prairie Township, Section 14.”

On Hayseed, Werner employs her signature songcraft and wit to deliver an assortment of tunes as hilarious as they are insightful. “There’s a certain sense of humor that goes along with farming because things don’t always turn out the way you expected,” she states. “If you can’t laugh about it, you might be in the wrong line of work.” Opener “City Kids” sets the tone for the record with a wry commentary on what Werner refers to as “the Revenge of the Nerds.” “Truth is that if you grew up on a farm, you always did feel a little square, a little behind,” she explains. “But times change and tables turn. And who’s paying twentyfive dollars a pound for organic pork these days? It’s not the farmers, people.” To a banjo and upright bass accompaniment, Werner practicallyspits out the title phrase: “All the city kids, they had fluffy little dogs, a dog that sits and begs, a dog with all four legs, didn’t smell like hogs.” 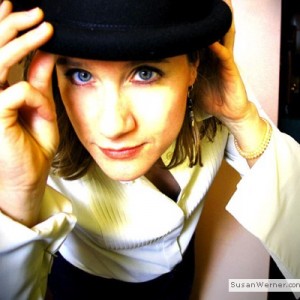