Testament features drawings by Joseph Moniz and paintings by Kris Ludwig who both investigate the human spirit and its ability to adapt to the internal and external events that affect each of our lives. Moniz’s realist nudes offer a reaction to the events of 9/11 through both the expressive nature of the female nude and the use of metaphoric paper forms. Ludwig approaches the idea of a psychological space through the medium of still life paintings. The inanimate forms in these paintings personify the internal self. In their own unique way, the artists analyze the themes of memory, loss, damage, and introspection, and attempt to make sense of the chaos which unfolds around us.

Kris Ludwig is an oil painter who works largely in the genre of still life. His subjects are generally everyday or mundane objects that strive to be something more than their often overlooked existence. Kris received is MFA at the University of Massachusetts Dartmouth, and he is an adjunct faculty member at Springfield College. See more of his work at www.krisludwig.com

Joseph Moniz is a figurative artist working in oil and drawings on paper. He received his M.F.A. from the University of Massachusetts Dartmouth. His work has been recognized in exhibitions and in private collections nationally and internationally. His work is represented by Gallery Antonia in Chatham, MA. He is a part-time lecturer at UMass Dartmouth. His work can be viewed at www.josephmonizfineart 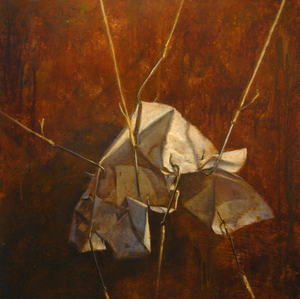