THE ART OF BRIAN FOX

The Art of Brian Fox will showcase nearly 30 new paintings as well as some of the artist’s most popular legacy artwork of sports and celebrity legends. This special hometown exhibit is designed to appeal to a wide variety of interests. Sports fanatics will see how Fox captures the emotion and intensity of New England Patriots’ Tom Brady; Olympic swimmer Michael Phelps; ‘Miracle on Ice’, often referred to as the greatest sports moment of the century featuring Jim Craig, Olympic gold medalist and goalie for the 1980 USA hockey team; and the famous bout of legendary boxer Micky Ward, subject of the Academy Award winning movie ‘The Fighter’, versus Atturo Gatti. History buffs have the opportunity to pay homage to World War II Hero Major Richard D. Winters and music aficionados will feel the vibes of Jim Morrison, Gene Simmons and Keith Richards, to name a few. ‘Each day for the past 20 years, I paint for clients around the country with a window view of Fall River, Mount Hope Bay and Battleship Cove,’ said Fox. ‘I am fortunate enough that my career as an artist specializing in painting the world’s greatest legends has granted me the opportunity to partner with athletes and celebrities to raise money for their charitable organizations and showcase my work in New York and Los Angeles galleries. I am most excited about this opportunity to share my latest artwork with family and friends in my local community.’ About Brian Fox Brian Fox specializes in painting the world’s greatest legends. His forte and passion centers around sports and music but his ability and experience extend far beyond that scope. Brian has painted some of the biggest icons of our time, including the late Jackie Robinson, Keith Richards, Michael Phelps, Johnny Depp, Ray Charles, and Mixed Martial Arts Champion Georges St-Pierre, to name just a few. Brian’s impeccable draftsmanship, attention to detail and uncanny ability to capture the ‘look’ of his subjects keep his masters of art in high demand. Brian is prominently featured in numerous celebrity events and high-profile charity benefits, always promoting his altruism and passion for expressive, visual art. Brian Fox’s artwork exhibits and sells throughout the United States. A special opening night reception will be held on Thursday, March 31, 2011 from 6 ‘ 9 p.m. This FREE event will feature ‘living statues’ performed by skilled artists from TEN31 Productions, based out of Providence, RI, dressed in World War II and baseball uniforms. 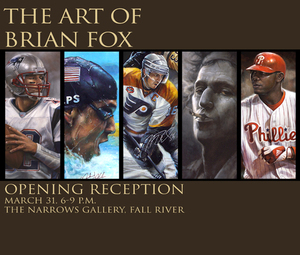