The Curtis Mayflower and The Blue Ribbons 5/5/16

This is a great double bill of two of Boston’s best rock and roll bands The Curtis Mayflower is Pete Aleksi, Duncan Arsenault, Jeremy Moses Curtis, Brooks Milgate and Craig Rawding. Five musicians creating a sound that is greater than the sum of its parts. Players who have toured, recorded with acts such as Booker T. Jones, Levon Helm, Howie Day, Heavy Metal Horns, Jim Carroll, Orchestra Morphine, Twinemen just to name a few. Formed in 2013, they have quickly amassed a large body of work and a larger audience for it. Hot on the heels of their self released EP ‘Live At The Dive (2013)’ which showcased the band’s ability to write powerful music on the spot, the debut album ‘Everything Beautiful Is Under Attack (2014)’ was welcomed by many critics as a refreshing take on the blues, soul and rock genres. The Curtis Mayflower currently has their third album written and has released two singles thus far: ‘King of the Fools (2015)’ which The Boston Herald says: ‘inverts the hot, fast pleading of the Temps Motown might with a chill, slow groove. Go if you wanna go, I ain’t begging. I’ll just sit here with my Donny Hathaway records and stand firm.’ and ‘Fourth Wall (2015)’ which The Worcester Telegram says: ‘On a very fundamental level, this is a song about our relationship with art, particularly music. In a lot of ways, Rawding’s voice is a comforting presence: Music’s there to keep you from feeling alone.’ The Blue Ribbons was formed by singer/songwriter/keyboardist James Rohr. They have been building a base of devoted fans with their original and soulful music. Described as ‘Ray Charles and Tom Waits on a pirate ship with Sun Ra and Captain Beefheart,’ they combine ‘upbeat disillusionment and celebratory fatalism with musicianship’ ‘ Charan Devereux;Boston Globe. 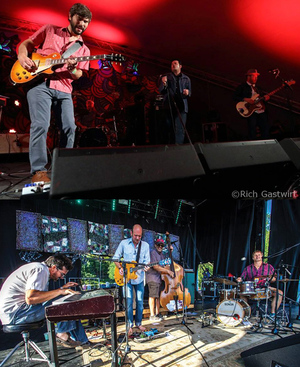