In the last couple of years, the Delta Generators have shared the stage with such acts as Robert Cray, Dirty Dozen Brass Band, Three Dog Night, James Cotton, Jimmie Vaughn, The Fabulous Thunderbirds, Johnny Winter, Walter Trout, Popa Chubby, Bonerama, Candye Kane, Michael Burks, John Lee Hooker Jr. and Sonny Landreth among many others. Notable musicians have also sat in with the Delta Generators on stage including Brad Whitford (Aerosmith). The Delta Generators have accomplished a lot since forming in 2008. They won the Boston Blues Society’s Blues challenge in 2008, which earned them a spot in the International Blues Challenge held in Memphis in 2009. The band finished as a Top 10 Finalist out of over a hundred bands. The Delta Generators also won an Independent Music Award for Best Blues Album category for their debut album, Devil in the Rhythm in 2009. In 2009 they won Best Blues Band in Worcester Magazine for and were nominated for Best R&B Act in the Boston Phoenix in 2010.The DG’s 2nd album Hard River to Row was selected by the Blues Foundation as a Top 5 Finalist (out of entries worldwide) in the Best Self-Produced CD competition at the International Blues Challenge in 2011. This album also placed nationally at #8 on the JamBand Radio Chart, #17 on the Living Blues Radio Chart and #25 in the Roots Music Report. The DG’s were nominated for Best Blues Act 2011 by The Boston Music Awards, and Best Blues Band 2013 by Worcester Magazine Music Awards. There’s no harder hitter than frontman Barrence Whitfield of Boston, MA. When he hits the boards with the Savages, you’re either gonna ride the energy or be crushed by it. We’re talking Joe Louis, Howlin’ Wolf, Wilson Pickett, Smokin’ Joe Frazier. Barrence has what these greats all possessed, the one thing a trainer cannot teach a fighter: a lust for mayhem. The wilder, louder, more insane the Savages bring it, the more BW is ready to attack the mic, to bring it high, to bring it low, to wear you down on the ropes, and eventually drop you. Backing Whitfield are the best cornermen in the business, led by garage/punk guitarist Peter Greenberg, the visionary who started the Savages after a legendary stint with the Lyres, and his sidekick Phil ‘Mr. Tenacious’ Lenker on bass. Greenberg works his guitar with the ruthless intricacy of a chain saw ice sculptor. Lenker meshes with drummer Andy Jody for an unrelenting sequence of haymaker beats. Tom Quartulli’s saxophone rips like a foghorn through the mist. 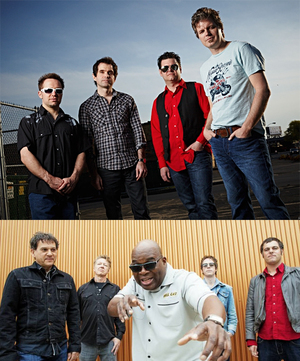