The Handsome Family’s highly anticipated album Wilderness will be released May 14 on Carrot Top Records. ‘Spider,’ a new track from Wilderness, can be streamed and shared at SoundCloud. The upcoming album from husband and wife songwriting duo Brett and Rennie Sparks follows 2009’s Honey Moon, which Pitchfork praised for ‘Rennie’s skillful threading of words into images and Brett’s sensitive translation of words on a page into vocals.’ Wild animals, tall tales, and dark stories from American history populate the lyrics of Wilderness. Appalachian holler, psychedelic rock, tin pan alley, and medieval music continue to inform The Handsome Family’s unique brand of Americana, while their affinity for old-tyme ballads and clawhammer banjo has never sounded so seamlessly connected to their use of samples, loops, and sonic effects. Wilderness has a great deal of musical variety: pop, classic rock, countrypolitan, bossa nova, and prog rock appear on the album along with parlour ballads, Cajun tunes, and hymns. Brett and Rennie Sparks have been collaborating on music for over 20 years. With lyrics by Rennie and music by Brett, The Handsome Family infuse their singular art with everything from punk rock to folk, and have garnered extensive critical acclaim over the years. ‘The songs are an effortless blend of vintage country and pre-rock ‘n’ roll pop,’ declared SPIN, ‘but New Mexico’s Handsome Family are no cutesy nostalgia act.’ Mojo named their 1998 album Through the Trees one of the ‘ten essential Americana records of all time,’ and Uncut called In the Air ‘one of the most important records of the 21st century.’ The Handsome Family’s songs have been covered by many notable artists including Jeff Tweedy, Andrew Bird, and Kelly Hogan. Originally from Chicago, The Handsome Family now record all their songs in a converted garage studio at the back of their Albuquerque home. 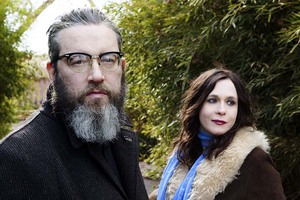