George Clinton began his musical career in N.J. where his obsession with Doo Wop and R&B lead to a Barbershop Quartet, literally, as Clinton and his friends also styled hair in the local shop. How George Clinton went from barber to funk music megastar is a story for the ages. Beginning as a Doo Wop singer and songwriter he absorbed all the major trends in pop music from traditional R&B to Motown, the Beatles, the Stones and psychedelic rock not to mention the formative funk of James Brown and Sly Stone. By the dawn of the 70’s he had emerged as the leader of a wildly creative musical movement composed mainly of two bands ‘ Parliament and Funkadelic. By the bicentennial, Clinton and his P. Funk Empire were dominating the pop charts as well as the soul charts. He is an artistic visionary visual icon, merry prankster, absurdist, philosopher, and savvy businessman all rolled into one. He is like no one else in pop music before or since. Known for his colored dreadlocks and wild costumes, Clinton is as photogenic as it gets. Fast forward to 2015. Clinton has once again recreated himself giving up drugs, and now, a nattily attired ringleader of the P. Funk Collective. This collection is the vision of photographer Alvin Lipsett who has been shooting the band for 20 years. Opening Reception: Saturday, February 28 from 3:00 – 5:00 pm. 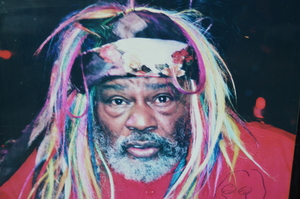