the Mericans, Allysen Callery, and Tig and Bean

the ‘Mericans are an Experimental Americana Roots Rock Band from Rhode Island led by Chris Daltry (formerly of Purple Ivy Shadows) who have just released their 3rd album So Late It Hurts. the ‘Mericans are also celebrating their 10th Anniversary as a band. Here’s what the Boston Globe said about their latest release. ‘Singer-songwriter Chris Daltry of Providence has been making darkly majestic, slowcore-tinged music since the early ’90s, when he led his first band, Purple Ivy Shadows, down lantern-lit paths of dream-pop wonder and soft psych parades that marched (and, sadly, vanished) into the mists of a new millennium. Thankfully, for those of us who like a little moodiness mixed with our melodies (think Pernice Brothers, Grandaddy, Varnaline), and guitars that tend to shimmer rather than shred, Daltry’s post-Purple endeavor picks up the baton the Shadows dropped somewhere around 2001. The ‘Mericans’ third album is a thing of beauty and reckoning, with an aching undertow and a thematic core that sounds restlessly political ‘ the opener, ‘When a Peaceful Bird Can’t Hear Her Own Song,” is a sorrowful stunner ‘ but whose sense of intimacy always feels intensely personal. The saturnine sparkle of ‘Language of America” particularly catches the ear, but throughout, Daltry’s just-this-side-of-craggy, Tweedy-esque demeanor gives these otherwise burnished songs a coat of rustic immediacy. So late it hurts? For Auto-tuned musical fashions of the moment, maybe. But for those who like following darker yet illuminating paths, the ‘Mericans are right on time.’ Allysen Callery is an Alternative Folk artist in the New Folk movement (also called ‘Freak Folk’ and New Weird America). In May 2011, Allysen embarked on her first European Tour, playing multiple dates in Germany & Switzerland, in support of her EP Winter Island, which was released by Berlin based Woodland Recordings. Folk goddess Marissa Nadler wrote of Winter Island : ‘Allysen Callery crafts a fantastic, delicate, and magical world to live in through her songs. Her writing is influenced by many years spent as a poet in and around the ocean towns of Rhode Island. Winter Island is gorgeous and blissed out.’ Allysen has been nominated for Best Female Vocals 2009, 2010 & 2011 by RI’s premier Arts magazine, The Providence Phoenix. Tig & Bean are and up-and-coming Providence Indie-Folk group who play music that has been described as Dirty Pretty Folk Blues. Tig & Bean are Lily Costner, Eric D., and Caroline Hecht. The group officially formed at the start of 2011 and have generated lots of interest from their local shows, including appearances at recent Providence and Boston Tom Waits benefit tribute concerts. 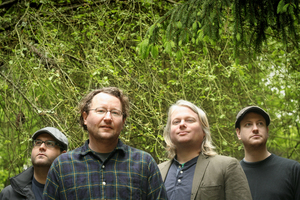