The Mericans, Route. 44 and Brown Bird

the ‘Mericans are an Experimental Roots Rock Band from Rhode Island who have won the Providence Phoenix Best Music Poll for the past two years. ‘Mericans singer Chris Daltry has been called a ‘visionary (local) founding father of rootsy rockers’ by the Providence Phoenix and the band’s two albums have been met with critical praise: ”Where All Dead Leaves Go’ is one Magical Listen and one of the Year’s Best Discs’ and the band’s ‘Southern-Fried Roots Shine across Warm with Tremolo, Hooks and Harmonies akin to Retro Gems from bands like Galaxie 500’ and the Phoenix has also described band’s music as ‘Quiet Music you Want to Crank.’ Brown Bird is an original 3 piece band which draws influence from Country, Blues and Eastern European musics. Brown Bird began over five years ago as the brain child of songwriter David Lamb and has developed into a miniature orchestra of harmonized voices and instruments carrying Lamb’s haunting lyrics on surging waves of Appalachian, gypsy, and shanty music. The group hails from Rhode Island and pulls from the talents of each member to create a diverse folk music that swells into high- spirited, foot-stomping madness. Route. 44 -Via saxophones, standup bass, viola, guitars, precise drums and percussion, and sultry-sly vocals, the band winds down roads as simple as electric folk and as densely complicated as full-on gypsy rock. Listing all the sounds they hit on here would take too much space, but it’s not stretch to say that no matter what they take on, they nail it. 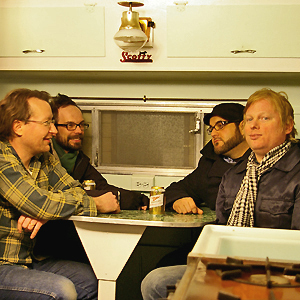