The Persuasions are the undisputed heavyweight champions of a cappella. They are to singing what Muhammed Ali was to boxing; invincible, innovative, original, and beautiful. Together since they started singing on the stoops of Brooklyn in 1961, The Persuasions have released 18 albums, and have recorded or performed with artists such as Stevie Wonder, Paul Simon, Van Morrison, and BB King. Original members Jimmy Hayes, Joe Russell and Jayotis Washington are joined by Reggie Moore and Ray Sanders. The Persuasions have recorded cover songs from Bob Marley, The Temptations, Grateful Dead, U2, and countless others. They have helped keep the art form of a cappella alive for the past 40 years by recording songs from these artists with their own unique style to create a new musical experience. In the process they have gone on to influence acts such as Boys II Men, Take 6, and Rockapella. In 2011 they will be supporting their new album ‘Knockin’ on Bob’s Door’ a tribute to Bob Dylan. 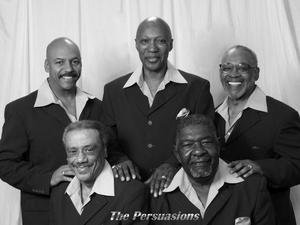