The photography of Justin L. Oliver: The Kirkbride Asylums

They were buildings of grandeur, their beauty and form meant to have a curative effect and to be ‘a special apparatus for the care of lunacy’. Now many of the ‘asylums’ built under the Kirkbride Plan stand abandoned, neglected, vandalized and decaying. Justin L. Oliver is a professional photographer/preservationist from East Freetown, MA who has spent the last nine years photographing and documenting derelict Kirkbride Buildings. He has an interest in both preserving these structures via photography and also in sharing their eerie beauty with others. Justin Oliver’s photographic essay of ‘asylums’ is a stunningly vivid and ethereal body of work and will be on exhibition at the Narrows Gallery in the Narrows Center for the Arts from June 19 through August 31, 2008. The Kirkbride Plan refers to a system of mental asylum design advocated by Philadelphia psychiatrist Thomas Story Kirkbride in the mid-1800s. The Kirkbride Asylums of Massachusetts are the Danvers State Hospital, Worcester State Hospital, Northampton State Hospital and most locally the Taunton State Hospital. Once state-of-the-art mental healthcare facilities, built in a time when the art of American architecture was young and many (now famous) architects were just coming into their own, Kirkbride Buildings have long been relics of an obsolete therapeutic method known as Moral Treatment. In the latter half of the 19th century, these massive structures were conceived as ideal sanctuaries for the mentally ill and as an active participent in their recovery. Careful attention was given to every detail of their design to promote a healthy environment and convey a sense of respectable decorum. Placed in secluded areas within expansive grounds, many of these insane asylums seemed almost palace-like from the outside. But growing populations and insufficient funding led to unfortunate conditions, spoiling their idealistic promise. Within decades of their first conception, new treatment methods and hospital design concepts emerged and the Kirkbride plan was eventually discarded. By the end of the 20th century most had been completely abandoned or demolished. Many that survive sit abandoned and decaying’their mysterious grandeur intensified by their derelict condition’. The above research and copyrighted information was found at kirkbridebuildings.com and wikipedia.org. Please visit those websites for complete information. The Photography of Justin L. Oliver will be on exhibit in the Narrows Gallery from June 19 through August 31. The Narrows Gallery is located in the Narrows Center for the Arts at 16 Anawan Street in Fall River, MA. Gallery hours are Wednesday through Saturday, Noon ‘ 5:00 p.m. and by appointment. Admission to the Narrows Gallery is free. All concert ticket-holders are also welcome to view the exhibition on performance night. Visit the Narrows’ website at www.ncfta.org and the artist’s website at http://jloliverphoto.com for more information. 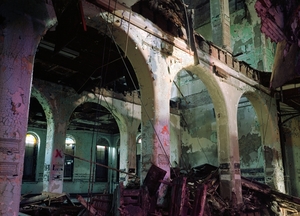