The Sculpture and Photographs of Sedneser Seeds

Joe Resendes is a self-taught sculptor who creates for the sheer joy of creating. He began carving baskets out of peach pits at the young age of seven. He later began carving faces on peach pits when he one day realized that he saw a place for two eyes, a nose and a mouth. He took out his trusty pocket-knife and began carving a face. This helped solidify a lifelong passion for creating. ‘I create because it’s a passion – a compulsion. I have little interest in selling my work, but rather enjoy and love sharing my work with others in the hopes that I will take them away, for a moment. If I have taken someone away for a moment, I have succeeded.’ Joe has carved faces on bushels of peach pits. In addition, he has carved on a sundry of materials including plastic, stone, wood (tree branches and drift wood), and molded innumerable pieces of clay. He even works with bending wire, giving many of his carved faces bodies. Each one of Joe’s pieces is unique and unlike the other, exhibiting many different forms of expression. His figures mirror that of humanity, exhibiting the every day trials and tribulations of the common man. Diane DeMelo has been capturing moments in photographs for over 14 years. To her, photography is a reflection of both shadow and light, which mirrors the fragility and strength of the human condition. The photographs in this body of work aim to highlight and capture the emotion expressed in the artist’s work. An Artists’ reception will take place on Saturday, October 4th from Noon – 3 pm. Admission is free. The public is cordially invited. 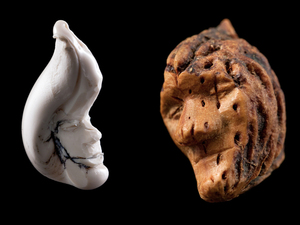