The timeless music of PETER GABRIEL has found new life through The Security Project. Featuring former members of Peter Gabriel Band, King Crimson, Shriekback and Sky Cries Mary, The Security Project not only recreates these masterpieces live, but gives them new musical wings for the 21st century. The reviews have been glowing: ‘Scary Good Show!’ raves Progression Magazine after their premiere in New York City. Noted musicians also have given a thumbs up, including Tony Levin, Larry Fast (both from Gabriel’s band) Steve Hackett (Genesis), Jon Anderson (Yes), Gabriel Mixer/Producer Tom Lord-Alge and Gabriel analyst Lilywhite Leigh. With Gabriel now a double-inductee into the Rock & Roll Hall of Fame (both with Genesis as well as his solo career) The Security Project specializes in the most adventurous, often un-played, music from his first five solo albums ‘ Car (1), Scratch (2), Melting Face (3), Security and Plays Live. Founding member Jerry Marotta says: ‘Peter was always great at setting the table for us as musicians; he always got us started with great ideas’ As we were creating SECURITY we had no idea we were making something so unique’ I’m proud that with Security Project we’re able to deliver the deepest of those songs, and do it with real conviction ‘ playing them live.’ 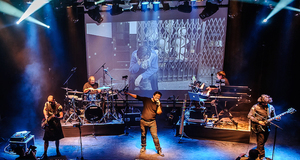