The Slide Brothers are Calvin Cooke, Chuck Campbell, Darick Campbell and Aubrey Ghent–the greatest living musicians who embody the Sacred Steel tradition. The joyous music these legendary artists create extends far beyond scared steel to encompass blues, rock and soul all celebrated with a sound that is uniquely their own. Despite its role in church services, this dynamic, high energy music had never been heard outside of church. As a new century dawned, rumors of an extraordinary new form of slide guitar began to attract interest among blues fans who long favored the electrified sound of slide guitar masters such as Elmore James and Duane Allman. Where the music of Muddy Waters or the Allman Brothers showcased traditional six string slide guitar, critics and fans alike were jolted by the an even more potent brand of slide guitar being performed on pedal steel instruments. As the center core of the Sacred Steel movement was its artistic purity. Ted Beard, Calvin Cooke, Aubrey Ghent and other pedal steel icons within the church had fostered a rich, uniquely American art form unspoiled by commercialism. Robert Randolph has become the most successful artist to emerge from the Sacred Steel tradition. Randolph was trained as a pedal steel guitarist in the House of God Church and his dynamic use of the instrument has earned him international acclaim. Randolph’s mission is to share the extraordinary talents of these legendary masters with audiences throughout the world. Together with Co-Producer John McDermott, Randolph has readied the group’s debut album for release by Concord Records. 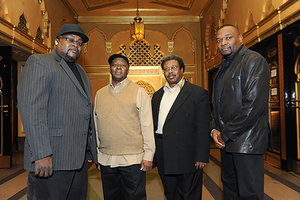