My two sons are the most beautiful creatures in the world!’ ‘ Teresa Spampinato Bronx, New York Was she biased? Who’s to say. But one thing’s for sure – Teresa’s boys are sharing their toys and playing nicely together. Joey Spampinato is a founding member of the legendarily diverse, critically acclaimed and much-loved NRBQ, the only band to appear at the Berlin Jazz Festival, the New York Folk Festival and the Grand Ole Opry in the same year. Some twenty-five or so years after NRBQ’s formation, Joey had the distinct pleasure of welcoming his brother Johnny into the band. During Johnny’s tenure, NRBQ continued to make great music in the studio and in concert while also becoming the first band to appear on ‘The Simpsons’ in both live and animated form. Now, Joey and Johnny turn a page and do what they always knew was their destiny: to write, record and perform music together as The Spampinato Brothers. They are joined by Aaron Spade on guitar and Jay Cournoyer on drums. 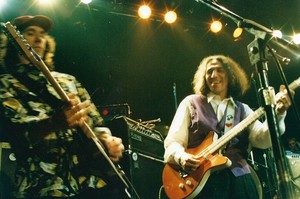