Technically speaking, The Sweetback Sisters come from Brooklyn, but philosophically, they hail from a parallel universe, an alternate timeline in which honky-tonk became the dominant sound in modern country music.

On their new album, ‘King Of Killing Time,’ the Sisters push their timely take on country’s golden age into more adventurous territory than ever before, with airtight harmonies, blazing leads, charging rhythms, and playful lyrics. Centered around the charismatic vocal interplay of Emily Miller and Zara Bode, the record’s ten tracks are a mix of infectious originals and unexpected interpretations of everything from George Jones to Gram Parsons. Hints of jazz and ragtime flesh out the group’s unique brand of Americana, as Miller, Bode, and their remarkably versatile band (guitarist Ryan Hommel, fiddler Ben Sanders, bassist Jason Sypher, and drummer Stefan Amidon) conjure up a singular blend of heart, humor, and virtuosic musicianship.

Hailed as “brilliant” by NBC New York, The Sweetback Sisters first emerged in 2007 with their debut EP, ‘Bang!’ The collection earned them a record deal with stalwart indie label Signature Sounds, and over the course of three ensuing albums, the band built a dedicated following in the US and Europe and racked up a heap of critical acclaim. The New Yorker raved that the women are “strong singers who revel in close harmonies,” while Sing Out! said that their music “bristles with the energy of the very best young American performers,” and NPR praised them as “Americana darlings with a roadhouse edge.” With a live show that The Boston Globe described as “the perfect balance of sass, sincerity and swing,” the Sisters have performed everywhere from A Prairie Home Companion to Mountain Stage. 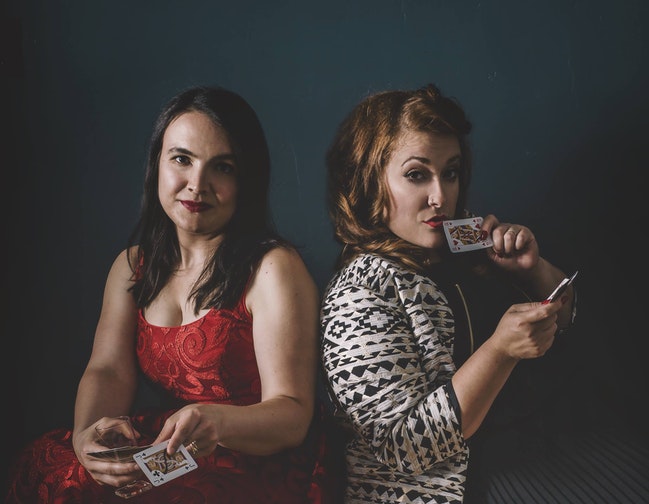