The Vespers are one of those lucky young bands who are becoming a word of mouth sensation though they’ve only quietly self-released one record. With two sisters on lead vocals and two brothers filling out the sound, the foursome are distinguished by an arsenal of instruments and the kind of harmony only siblings can create. They have toured from Boston to Austin, hitting everything from festivals to college campuses in between. On The Fourth Wall, out April 3rd, they create infectious folk-pop with both the buoyancy of youth and deeper spiritual themes. The lead vocalists Callie (21) and Phoebe Cryar (19) were brought up in a musical family in Nashville, honing their gifts as young kids singing background vocals on Music Row. While their pure harmonies are described as ‘ghostly and haunting’ and ‘honey sweet,’ they both have expansive characteristics to their vocal and instrumental abilities. It was a chance meeting at a campfire jam that brought the sisters an earthy grounding in brothers Bruno (20) and Taylor Jones (22), who were drawn to gritty southern rock and the depth of their father’s record collection that included soul music from the likes of Stevie Wonder. 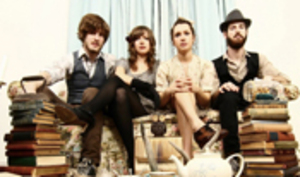