This is a rare US appearance. The band was formed around 1979 in refugee camps in Libya but returned to Mali after a cease-fire in the 1990’s. Tinariwen are often associated with just one image: that of Touareg rebels leading the charge, machine gun in hand and electric guitar slung over the shoulder. The founding members abandoned their weapons long ago and have engineered a minor aesthetic revolution by setting the electric guitar ‘ the instrument which became their mascot and made them famous ‘ to one side and giving pride of place to acoustic sounds, recorded right in the heart of the desert, which is the landscape of their existence, the cradle of their culture and the source of their inspiration. Tinariwen’s music and sensibility have always been close to the American Blues and on ‘Tassili’ they re-enact the emotions of an individual who finds himself face to face with loneliness and doubt, gripped by torment, the prisoner of inextricable circumstances (‘Djeredjere’). But that individual also manages to find hope in the strength of his community (‘Imidiwan Wan Sahara’) or in the simple pleasure afforded by insignificant daily moments, as on the song ‘Takest Tamidarest’, sung by Abdallah, which drops us right in the middle of the desert, with its slow-baked pace that lends itself to pure contemplation of man’s surrounding and to profound inner meditation. For that reason, ‘Tassili’ isn’t just an extraordinary musical moment, in which Tinariwen repossess their own art to the extent that they feel completely relaxed about inviting others into their world, it’s also a shared human experience of rare quality. 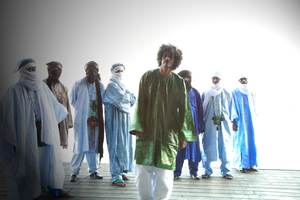