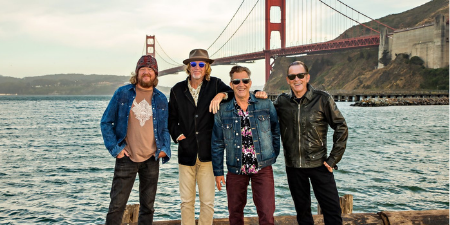 BUY TICKETS
According to all the press and hype and hoopla for a time, Tommy Castro was pegged as the next big star of the blues. Long a favorite among Bay Area music fans, Castro — in the space of two album releases — took his music around the world and back again with a sheaf of praise from critics and old-time blues musicians alike. His music was a combination of soul-inflected rockers with the occasional slow blues or shuffle thrown into the mix to keep it honest. His vocals were laid-back and always a hair behind the beat, while his scorching guitar tone was Stevie Ray Stratocaster-approved. Crossover success did not seem out of the question.

Born and raised in San Jose, California, Castro started playing guitar at the tender age of ten. Initially inspired by Mike Bloomfield, Eric Clapton, and Elvin Bishop, he started the inevitable journey into the roots of his heroes and discovered and quickly became enamored of B.B. King, Buddy Guy, Elmore James, Muddy Waters, and Freddie King. His vocal styling came from constant listening to Ray Charles, Wilson Pickett, James Brown, and Otis Redding. After playing with numerous Bay Area groups honing his chops, he landed a gig playing guitar for the San Francisco band the Dynatones, who were then signed to Warner Bros. The two-year stint augured well for Castro, playing to the biggest crowds he had seen up to that point and backing artists as diverse as Carla Thomas and Albert King.

Returning to San Francisco, Castro formed his own group and in 1993 released his first self-produced album, No Foolin’, on the dime-sized Saloon label. That same year also saw him winning the Bay Area Music Award for Best Club Band, an honor he duplicated the following year. In 1997, he won Bammies for Outstanding Blues Musician and for Outstanding Blues Album for his debut release on Blind Pig Records, Exception to the Rule. Also in 1997, Castro and his band began a three-year stint working as the house band on NBC’s Comedy Showcase, which aired after Saturday Night Live.

Live at the Fillmore was released in early 2000, and with everyone from industry insiders to B.B. King singing his praises, Castro appeared to be headed for bigger and better things. It was not to be, however, as in 2001 he left Blind Pig Records and recorded Guilty of Love for the small 33rd Street label. Blind Pig closed the books on their association with Castro in 2002 by releasing the career retrospective The Essential Tommy Castro. Gratitude appeared from Heart and Soul in 2003, followed by Triple Trouble (with Jimmy Halland Lloyd Jones) later that same year from Telarc. In 2005 Castro returned to the Blind Pig label for the release of Soul Shaker, followed by Painkiller in 2007.

The relatively smooth and polished Hard Believer appeared from Alligator Records in 2009, followed in 2011 by The Legendary Rhythm & Blues Revue: Live!, a collection of highlights from Castro’s recent live performances, also on Alligator Records. The Devil You Know, which featured Castro’s stripped-down new touring band the Pain Killersand a host of guest artists, appeared early in 2014. Working at Laughing Tiger Studio in San Rafael, California, Castro used a more skeletal approach for 2015’s Method to My Madness. It was the first time the bandleader acted as his own producer and, as such, the feeling of the record, which was cut live from the floor, best reflected the group’s concert performances. It was released in late October of that year.