Siblings Danielle and Nick Schnebelen have a life-long connection with the blues. Growing up in Kansas City, MO, they soaked up the music of their parents, who were active in the thriving blues scene. Trampled Under Foot was originally formed as a family band consisting of Danielle, Nick and Kris Schnebelen. The trio headed to Memphis in 2008 for the IBC and walked away from the competition with First Place honors. Riding the wave of support following the IBC, Trampled Under Foot was ready to take their style of power blues/rock to audiences around the world. After a series of headlining tours and stand out performances at blues festivals across the globe, TUF earned the reputation as one of the hottest bands on the blues circuit. While watching their fan base grow world-wide, the trio released multiple CDs and DVDs under their own label, TUF Records, including the highly acclaimed 2011 album ‘Wrong Side of the Blues.’ The success of that album caught the attention of many throughout the music industry and in 2013 the band partnered with Concord Music Group to release their major label debut, ‘Badlands.’ Hailed by fans and critics alike, Badlands revealed a musical sophistication well beyond the band’s years and provided further proof that Trampled Under Foot was the real deal. In 2014, after brother Kris announced he was leaving the band, Danielle and Nick solicited long-time friend and fellow KC musician Jan Faircloth to join them on drums. Jan brought with him years of experience as a musician in the Kansas City blues scene and provided a fresh take on the band’s trademark sound. The addition of Jan inspired TUF to make other changes in their line up and the group added keyboardist Mike ‘Shinetop’ Sedovic as an official member, turning the trio in to a 4-piece powerhouse blues band and adding a new dimension to their already stellar live performance. 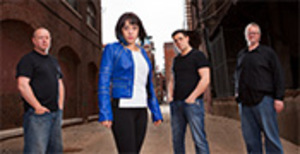