It’s been a long night if that’s what happened,’ Valerie June laughs when asked about her seemingly overnight breakout in the UK. By the time she released her debut album, ‘Pushin’ Against A Stone,’ the Tennessee native had already performed on Later’ with Jools Holland, sung a stunning duet with Eric Church at the ACM Awards, toured with Jake Bugg, graced spreads in top music and fashion magazines, and earned some of the year’s most glowing reviews. But June traveled a long road to the remarkable moment at which she now finds herself. ‘I feel like my whole life I’ve always had a stone I’ve been pushing,’ she says, explaining the record’s title. ‘Some days it’s a good thing to have, like a best friend, and sometimes it’s your worst enemy. In the case of this record, I had so many friends helping me move the stone.’ Those friends include the album’s producers, Kevin Augunas (Edward Sharpe, Florence + The Machine), Dan Auerbach, and Peter Sabak, along with an all-star cast of fellow musicians ranging from Booker T. Jones and Jimbo Mathus to some of Hungary’s top session players. Recorded at Easy Eye in Nashville, Fairfax Recording in Van Nuys, CA, and Studio H in Budapest, the album is a showcase for June’s astonishing and singular sound, a blend of rural roots and country that bridges Alan Lomax’s acoustic field recordings with biting, electric indie-blues. From the slide guitar shuffle of ‘You Can’t Be Told’ and heavenly harmonies of traditional spiritual ‘Trials, Troubles, Tribulations,’ to the stark, acoustic ‘Workin’ Woman Blues’ and the uncanny darkness of ‘Twined and Twisted,’ June effortlessly shifts between eras and genres. She can be haunting and melancholy, singing of loneliness on ‘Somebody To Love,’ or full of warmth and charm, fondly recalling her home on ‘Tennessee Time.’ At one moment seductive in a sensual come-on, fragile and vulnerable the next in a display of naked honesty, June transports you to another world the moment you hear her voice. 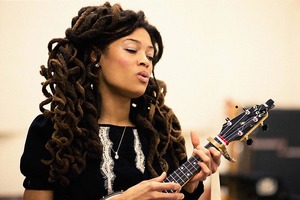