Walter Trout’s passionate new Blues for the Modern Daze cuts right to the core of his art and his heart. His 21st album returns the contemporary guitar legend to his hard-core blues roots and finds his songwriting at a creative and personal zenith. Trout’s sixth recording for Provogue Records is his first pure blues album in 23 years as a bandleader, which is astounding given his heavy resume in the genre. Trout spent five years in John Mayall’s Bluesbreakers and was a member of Canned Heat, two of the style’s supremely influential bands. He’s also supported a slew of classic artists including John Lee Hooker, Big Mama Thornton and Joe Tex. Nonetheless, as a front man the six-string virtuoso developed a conflagrant approach to his instrument and a reputation for tornado-strength live shows that led famed BBC disc jockey Bob Harris to call him ‘the world’s greatest rock guitarist’ in his influential book The Whispering Years and won Trout the sixth spot on BBC Radio One’s list of the Top 20 guitarists of all time. 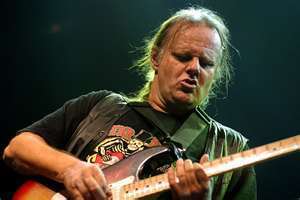