We Talk in Pictures

Boston based artists, Liz Linder & Richard Griswold, work in different worlds but share a sensibility at the heart of their artistic momentum. Here, they collaborate on a body of work that explores the immediacy of modern electronic conversation.
Somewhere between scavenger hunt and passing notes in school, ‘We Talk in Pictures’ explores a game they invented to stay in touch, inject humor into the day, and share observations of form, space, materiality, and message to find meaning within everyday experiences. The exhibition extracts conversations from their personal glowing rectangles, and translates them into ‘idea clusters’ on the gallery walls.
The two artists are also showcasing independent collections – Linder’s images of Performing Artists spanning two decades, and Griswold’s watercolor paintings of form and shape that are ‘quicker than architecture’ including his Scenes from the Jungian Sandbox.
A closing reception will take place on Sunday, February 3rd from 1:00 – 4:00 pm. The public is cordially invited. Admission is free.
Bios:
Liz Linder’s ability to connect with her subjects in unexpected ways is central to the way she captures performing artists and personalities including the likes of Davy Jones, DJ Spooky and Esperanza Spalding. Her work has appeared in dozens of leading publications including Rolling Stone, The New York Times and Spin. She’s been heard on On Point Public Radio and seen on ABC World News Tonight. Her personal work is exhibited and collected throughout the U.S. and Europe.

Richard Griswold is Associate Provost and Dean of Students at the Boston Architectural College where he teaches introductory design theory. He also works part-time as an architect. Alongside this work, often as an antidote to it, Rich’s art explores watercolor painting and its possible intersections with designed space. On two occasions he has dropped everything to explore his watercolor world as a MacDowell Fellow. Rich studied photography as an undergraduate, and his game with Liz represents was Julia Cameron calls a ‘creative U-turn’, a chance to revisit a long-dormant way to express and connect. 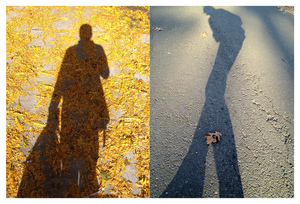