Breaking every cliche associated with the blues while producing some of the most powerful music of the 21st century comes natural to Albert Cummings. The Massachusetts native learned the requisite three chords on the guitar from his father, but then switched to playing banjo at age 12 and became a fan of bluegrass music. Before graduating he heard the early recordings of Stevie Ray Vaughan, however, and was floored by the virtuosity. While in college he saw Vaughan perform and he returned to the guitar with a new outlook and resolve. Not until he was 27, an age when other musicians were either already established or had long ago put their dream aside for the realities of life, did Albert finally decide to go for it. An intense period of wood shedding resulted Albert sharing a bill with Double Trouble, the late Stevie Ray Vaughan’s rhythm section. So taken with Albert’s fire and passion were bassist Tommy Shannon and drummer Chris Layton that they volunteered to play on and produce his debut recording. In 2003 the aptly-titled From the Heart (Under the Radar), with the awesome power of a Nor’easter and the soul of a natural born artist. Tours and shows with blues legends B.B. King, Johnny Winter, Buddy Guy and others brought his music to an audience grateful for the opportunity to be rocked hard by a man possessed to play every song like his life depended on it. Albert Cummings is a man of his times and the man for the times. He has built his own musical edifice that expresses his thoughts and dreams. It is a vision that alternately excites and soothes while also clearly providing a glimpse of his unlimited future. The best is yet to come. 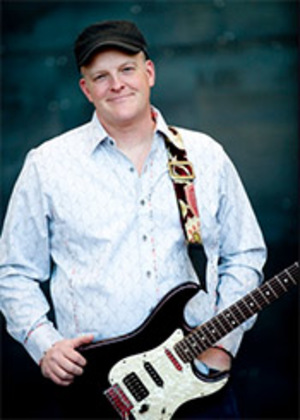