GuitarOne magazine calls guitarist/vocalist Coco Montoya ‘the hottest southpaw in the blues’ and raves about his ‘master touch and killer tone.’ The Boston Globe succinctly states that Montoya’s music is ‘hot, blistering soul.’ From his early days as a drummer to his current status as one of the top-drawing guitarists and vocalists on the blues-rock scene, Montoya earned his status through years of hard work and constant touring. 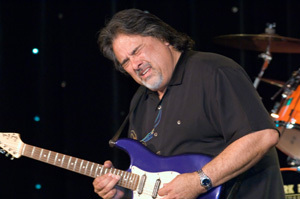