Ticket #415741 is the winning raffle for the month of July. If this is your number, call or email the box office (Wed-Sat 12-5) for instructions on receiving your $250 gift card. Thank you to everyone who participated this month!! END_OF_DOCUMENT_TOKEN_TO_BE_REPLACED

Schofield is lauded as the British blues guitarist of current times. Guitarist magazine said, “There isn’t a better British blues guitarist playing currently”. With his first release for Provogue, Schofield finds himself as representative for the long tradition of British Blues on the ultimate blues guitar label, and gaining a home amongst his peers – the world’s greatest contemporary blues players. END_OF_DOCUMENT_TOKEN_TO_BE_REPLACED

Born in Charlestown, Steve Sweeney is a legendary Boston comedian known as a master of dialects and character voices. With his famous Boston accent and great insight into human nature, Steve is so thoroughly Bostonian that he merits his own stop on the MBTA Green Line. Steve learned his craft at the world famous Ding Ho Comedy Club, where he performed with Lenny Clarke, Denis Leary, Jay Leno, and more. Well-rounded and seasoned, Steve has kept audiences laughing for years. He won his status, the old-fashioned way – he earned it! END_OF_DOCUMENT_TOKEN_TO_BE_REPLACED

The Narrows is excited to be hosting Rick Massimo, the author of I Got a Song-A History of the Newport Folk Festival. The first-ever book exclusively devoted to the history of the Newport Folk Festival, I Got a Song documents the trajectory of an American musical institution that began more than a half-century ago and continues to influence our understanding of folk music today. END_OF_DOCUMENT_TOKEN_TO_BE_REPLACED

Sisters Shelby Lynne and Allison Moorer, now with twenty-four albums and Grammy, Oscar, and many other kinds of awards and nominations between them, share that kind of transcendent musical bond.  END_OF_DOCUMENT_TOKEN_TO_BE_REPLACED

Acclaimed singer, songwriter, and bandleader, Ryan Montbleau and his talented band blow us away in every performance, almost always selling out the Narrows house. In his newest album, I WAS JUST LEAVING, the New England-based artist has truly arrived.  END_OF_DOCUMENT_TOKEN_TO_BE_REPLACED

Janiva Magness is a blues and Americana soul singer and songwriter. Anyone who has ever heard Magness sing knows that she is a strong, resilient, commanding woman in masterful control of her voice.

END_OF_DOCUMENT_TOKEN_TO_BE_REPLACED

Formed in London in 1979, The FIXX are a British rock band whose hits include “One Thing Leads to Another,” “Saved by Zero,” “Are We Ourselves?” and “Secret Separation” (all of which made the U.S. Top 20), as well as early MTV video hits “Red Skies” and “Stand or Fall.” The band features the classic line up of Cy Curnin, Adam Woods, Rupert Greenall, Jamie West-Oram and Dan K. Brown and are heralded as one of the most innovative bands to come out of the MTV era. In concert, The FIXX deliver that same sonic authenticity fans have come to expect from their recorded performances.

Join us for a day of golf, good company and lots of fun on Sunday, October 1st. Held at Swansea Country Club in Swansea MA, this is the 8th year for our annual fundraiser, in which all the proceeds go towards programming at the Narrows Center. END_OF_DOCUMENT_TOKEN_TO_BE_REPLACED 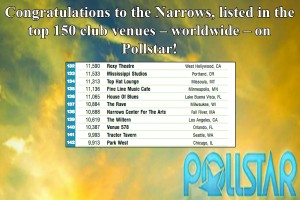